We Are Here To Change the World!

How Disney, Star Wars, and Michael Jackson have shaped who I am:

You’re probably asking yourself, how in the world do these three different entities coincide? Well, you might be asking that if you don’t know me personally. Anyone else knows that I’m a huge Captain EO fan. In fact, I might be the biggest Captain EO fan ever. I can quote the short 3D film verbatim with voices and listen to the soundtrack, tell you what’s happening on screen, and cry every time I see it. And… I have an even bigger confession, one that might land me in hot water considering I’m a children’s entertainer, but I also have a tattoo of Captain EO. If you don’t know what I’m talking about, do yourself a favor and watch the video right now, and I triple dog dare you not to dance in your seat. Go ahead, watch. I even took a break from making a video this week so that I could share this and my revelations about this film with all of my friendz!

Now that you’ve had a chance to revel in the true amazingness that is Captain EO, let me tell you how I came to love it. Captain EO is the brain child of George Lucas, Jim Henson, Francis Ford Coppola, and Michael Jackson, starring the great Angelica Houston and produced by the Walt Disney Company. Oh, and did I mention that James Horner did the score? If that doesn’t get your attention, I don’t know what will. Captain EO debuted in Disneyland and Disney World’s EPCOT September 12th, 1986, when this girl was merely two years old! And since my parents didn’t want a screaming toddler on their hands, they waited until I was 5 years old before I saw the 3D attraction. They said that the first time that I saw it that I was incredibly scared of Angelica Houston’ s villain, the Supreme Leader. But hey, you would be too. Those fingernails in 3D are TERRIFYING. But nonetheless, I kept begging to go back. I couldn’t get enough, no matter how old I got, or how old and outdated the attraction got. The attraction closed in 1994, both to make way for a newer, shinier attraction, Honey I Shrunk the Audience, and also because of the many Michael Jackson scandals. I was understandably very upset. How could Disney take away my favorite thing?

As I got older and made more friends, they were mystified when I described Captain EO, because young friends, there was no YouTube back then. They all thought that I had dreamt this amazing 80’s spectacular! That is, until I got to my freshman year of college. That first week of finals your freshman year is tough. You’re away from home, and you have all of these long and difficult tests. The internet was finally becoming much more user friendly and accessible, and so in my time of need I searched “Captain EO Video.” Sadly, I did not find a video of the film, BUT I did find the entire soundtrack on a site. SCORE! I must have listened to that soundtrack a 100 times in that week alone. It made me feel comforted. It made me feel energized. It made me feel inspired. But I didn’t quite know why.

A few years later, tragedy struck, Michael died. I was seriously devastated. No, seriously. More people called and texted me on the day that Michael died than on my birthday that year. But out of the darkness comes the light. They re-opened Captain EO in Disneyland and Disney World EPCOT as kind of a tribute to Michael. I was OVERJOYED. This time when I watched, I would start the clap for Michael as he ascended to the main deck. I would cry as he moonwalked across the soundstage. And I would leave the theater every time feeling renewed. But why? Why in the world am I SO obsessed with this one piece of pop culture? Why do I have Captain EO as my phone background? Why do I have the rainbow prism on his shirt tattooed on my body? Why do I carry a stuffed Hooter around with me, when I travel, as a good luck charm? And WHY am I telling you all of the stuff that kind of makes me a crazy person??? Well, that is the real point that I would like to make today.

By this point, I know you’re thinking, “When in the world is this crazy girl going to make her point and tell me how this weird 3D movie that Disney made in the 1980’s made her want to create a children’s entertainment empire?” Well, my friends, let’s dissect the story. Captain EO is on a quest to “Change the World.” He leads a rag tag group of Muppets. This is a Rag Tag group that everyone else would pass by. The group of that everyone thinks, “Meh, they’re cute, but they’re just mediocre.” THOSE are the groups that I love the best. I LOVE rag tag groups. The plucky characters that work their tails off to achieve their goals. That is who I love to surround myself with. Now, this is not to say that my friends aren’t talented. I mean, look at EO’s crew. They could fly a plane AND put down some pretty groovy beats. My friends, students, and loved ones are most certainly talented, but sometimes, they are the ones over looked… but look out world, “Blessed are the geek, for they shall inherit the Earth”… or is that the “meek?”

Then, we get to the whole fact that this rag tag crew is on their last leg of their mission. This is such a played out storyline, but boy do I love it because it just goes to show that no matter how far down you are, you can ALWAYS save yourself! Now, how does Michael save himself, his crew, and this planet? Does he brashly go to the Supreme Leader and scream out, “You’re terrible! You have to stop ruining your planet! You’re people are miserable!” Nope, he apologizes for coming in unannounced and gives her a gift. Granted a gift that will ultimately change her, but a “gift.” As my Mama, and many other brilliant Southern Mamas say, “You catch more flies with honey than vinegar!”

And what is this gift? A song and a dance. Now, this, this is where my imagination truly took over as a child. This delightful little short was probably just meant to be a cheesy distraction to show the wonders of George Lucas’s space operas, Jim Henson’s Muppets, Disney’s cutting edge 3D technology, and Michael Jackson’s musical genius, but what did this girl take away? Oh, only that you can change nasty humans with a song, a dance, and a heck of a lot of conviction. Michael sings “We Are Here to Change the World,” while shooting rainbows out of his hand to make the Supreme Leader’s guards turn into fabulously neon-clad 80’s dancers. And as ridiculous as it sounds, this is how I want to live my life. Yeah… I know that I don’t have the superpowers to shoot Care Bear-like rainbows out of my hands to turn bad people good. But maybe with enough light we can cast out the dark.

That is the real moral of this story friends. LIGHT CASTS OUT THE DARK. In fact, Francis Ford Copolla named the film and the titular character after the Greek God Eos, the God of the Dawn. As Dr. Martin Luther King Jr. said, “Darkness cannot drive out darkness; only light can do that. Hate cannot drive out hate; only love can do that.” In this time of polarization, this time of hatred, this time of pointing fingers, the only thing that we can do is shine our light. Think good thoughts, speak good words, and do good things. I want to take it one step further. I want to Captain EO it! See, Captain EO wasn’t satisfied with him and his rag tag group saving the world. He wanted to go to these worlds and show the people how to save themselves! By showing these people learn how to shine their lights, he showed them how to save themselves. You see, in the end of the song EVERYONE sings “We Are Here to Change the World.” And that’s the most magnificent power of them all, to show people how to save themselves. Not through a book or by following one specific person, but one singular thing- LOVE! Everything points back to love.

So, that’s my story, my long drawn out reason of why I obsess over Captain EO. It’s because I know to change the world, I can’t do it alone. I need a rag tag group of Muppets to help me. I’ve already got some at my performing arts studio Setting the Stage. And you can check out our many programs to help the community here: settingthestagenashville.com. Heck, I was that rag tag Muppet when I was a kid, and through many wonderful teachers (including my parents) I learned to shine my light bright enough to cast out the darkness. Will you join me? Will you join us in casting out the darkness? Let’s mold a generation of light shiners, who will also shoot rainbows out of their hands to turn the bad into the good. Another thing I LOVE about Captain EO is that even thought the Supreme Leader was terrifying, she was still worth saving. There was still good in her. Let’s at least try and find the good. The good in every child at the very least. Then this can be the generation who will “Change the World” for good.

Love you all more than words can say!

Try a little kindness, my friend... 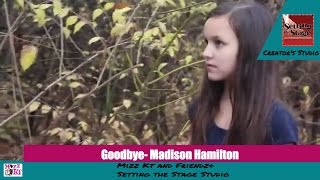